Are you looking for a martial arts school that is focused on using martial arts as a means to self improvement, rather than just fighting? 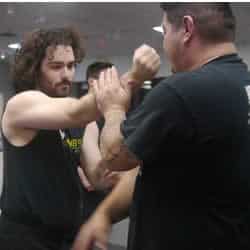 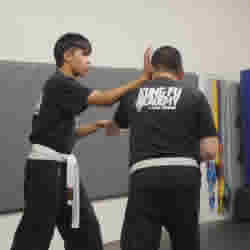 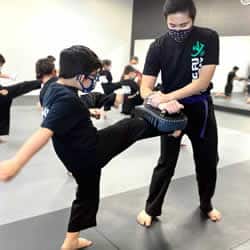 My name is Kevin Kawada and I, along with my wife Renee, and my son Isaac are the owners of the Las Vegas Kung Fu Academy.

We moved from Hawaii to Las Vegas in March of 2004.  We have been teaching ever since.

Since that time, we have worked very hard to provide the Las Vegas and Henderson, Nevada areas with the best martial arts instruction and self-improvement training possible.

I started training in Karate as a teenager.

At that time in my life, I was getting into a LOT of trouble. I was hanging out with the wrong crowd.But wait, it didn't stop there..Unfortunately, I was staying out late without calling. Basically, I was a juvenile delinquent. In truth, I was my parent's worst nightmare come true..

Astonishing, isn't it?Suffice to say I owe my parents a BIG apology!Anyway, training had so many benefits to offer, but at this time in my life, I wasn't actively looking for them.Honestly, I just thought it was the coolest thing in the world to be able to actually learn this stuff. However, it was only after a few months of training that I became aware of all of the benefits that training in martial arts had to offer.

Benefits like increased focus and concentration, confidence, and self-discipline became a huge part of my life.

In other words, as I went to more and more classes, my life began to change.

Surprisingly, I began to apply the lessons of martial arts to my everyday life. Indeed, I found that I began to surround myself with like-minded individuals. Simultaneously,  I began to spend less time with people who were content with being lazy, undisciplined and irresponsible.

Fortunately, I learned that the  perseverance required to master a karate form (kata) was the same type of perseverance needed to write a college essay. I found that the mental toughness required for sparring helped me get through stressful times in my life. I learned that the self-discipline needed to get proficient with fighting was the same self-discipline required for finishing that work project on time.

Consequently, I began to approach problems in my life, in the same way I approached my training.

But you know what else? I realized that martial arts styles like Wing Chun, Karate, Muay Thai, Escrima, Arnis, Kali, Judo, Chinese Kung Fu, and Jeet Kune Do are not just ways of fighting, but rather they are ways or paths to learning about yourself.

You’re going to love this…

Best of all, I APPLIED what I was taught in martial arts classes to my life outside of the academy.

If the lessons of martial arts cannot improve you as a person, then what is the point? Martial arts instruction has little value in today's modern society, unless it can change you. The bottom line is, martial arts is really a way of life.

Training in martial arts is a never-ending quest for improvement. Training can be the most wonderful, life-changing, an activity that you experience.

In the end,, if you have what it takes to master the skills required of a style, you will, in essence, have mastered yourself.

It all comes down to this...

My life has been transformed by martial arts. I hope that it can do something similar for you. Better yet, if you are looking for top-notch martial arts instruction in Las Vegas or Henderson, NV, we would like for you to come in and check us out. you won't regret it!

Classes for men, women and children ages 3 and up

We would love to have you as our next student! Most students start with no previous experience

What our students are saying

We have been searching for over a year for the perfect karate place for my daughter to train at, and we are grateful to have found the Kung Fu Academy!

We did a trial class and immediately signed her up. Master Kevin is a phenomenal instructor who pushes his students to be better in the best way possible!

I've been going here for 9 months now, I started with absolutely no experience at all. In fact, I had no experience with anything remotely active. Martial arts classes have helped me get in much better shape while at the same time making me more self-confident.

All of the other students who come here are very friendly and helpful.

I did not expect to see myself ever being a martial artist and I am very happy I stopped by..

I strongly recommend coming here to at least try it out if you are at all interested in learning self-defense. The Kung Fu Academy is the best place to start!

I train at the Las Vegas Kung Fu Academy and I have to say, this place has become a second home to me. I have learned so many lessons in both martial arts and in life. If you are looking for a hard workout and a family-oriented environment, this is the place for you! In addition, the kids' program is amazing.

Our 10-year-old son goes to kids martial arts class. Both his behavior and attitude have improved since enrolling. He loves the format of the class and loves his classmates! Who wouldn't want that for their child?

Some of the styles you will learn in our martial arts class are:

These are some of the fighting styles available here

The instructors are amazing and great with our son

Kevin, Renee and their son Issac was very friendly and welcoming my family for a visit. Our son loves it so much we signed up today. Love that they teach various techniques of martial arts and etiquette.

My children have learned so much since being at this school. At the studio, they are now around kids with a common goal to be the best they can be, and I love having my kids at this academy.

We have tried other karate places and they were all about money. At the Las Vegas Kung Fu Academy, it’s not that way at all. They really care about how the student is progressing.

My kids (ages 4 and 11) love going to the Las Vegas Kung Fu Academy. The instructors and students are awesome and the atmosphere is so positive.