For people looking for reality based self defense classes...

Training in the Filipino Martial Arts of Kali, Escrima, And Arnis will make you a well rounded fighter

First, Kali, Escrima, And Arnis are all terms for the indigenous martial arts that come from the Philippines.  However, most of the Filipino martial arts are really similar at their core.

Another key point, students of the Filipino martial arts are knowledgeable in the use of bladed and impact weapons as well as empty hands techniques. In the past, the different names correlated with different region within the Philippines.

However, most people in the Philippines today know and call the art as Arnis.  As a result, the terms Kali and Escrima are not used anymore.

Fortunately, Filipino martial arts have many characteristics which make it a very unique and effective self defense system for people like you who are interested in reality based training.

First, one characteristics of Kali, Escrima, And Arnis that is core to its very nature is the idea of flow.

In particular, flow is usually taught to you at the very start of their training. Also, learning to flow against attacks will quickly build up your reflexes and agility.

In addition, continuously flowing is crucial to being able to successfully defend yourself against an attack.

Second, characteristic of the Filipino martial arts is that you will start off learning weapon techniques very early in their training.

One must remember, the Filipino martial arts are also known for it's training weapon skills first rather than last in developing a student's ability.

In contrary, to Chinese martial arts that will only teach you weapons after they have mastered their stance and empty hands training.

For this reason, this type of training is very useful for those in the military and law enforcement. In terms of practicality, techniques for taking away an armed opponents weapon is probably going to save your life.

Like many martial arts, Kali, Escrima, And Arnis were taught to be a self defense art. However, flashy and flowery techniques that were mostly for show were never part of the Filipino martial arts. Instead, Kali, Escrima, And Arnis were originally meant to be taught to villagers who needed to defend their very lives against other competing villages or foreign invaders to the Philippine archipelago.

If a student needed to be extremely talented or gifted in order to execute techniques, then the village would not have been able to be successful in surviving. As a result, only movements that were natural and easy to learn were kept as part of Kali, Escrima, And Arnis.

As a rule, simplicity in combat is valued over knowing a bunch of different techniques. Also, for the Kali, Escrima, And Arnis student, it is better to master a small number of techniques than to have a weak comprehension of 300 techniques.

In other words, a student who is extremely skilled in a handful of techniques will be much more likely to emerge victorious because that student will be able to execute his techniques with smoothness, flow and power. 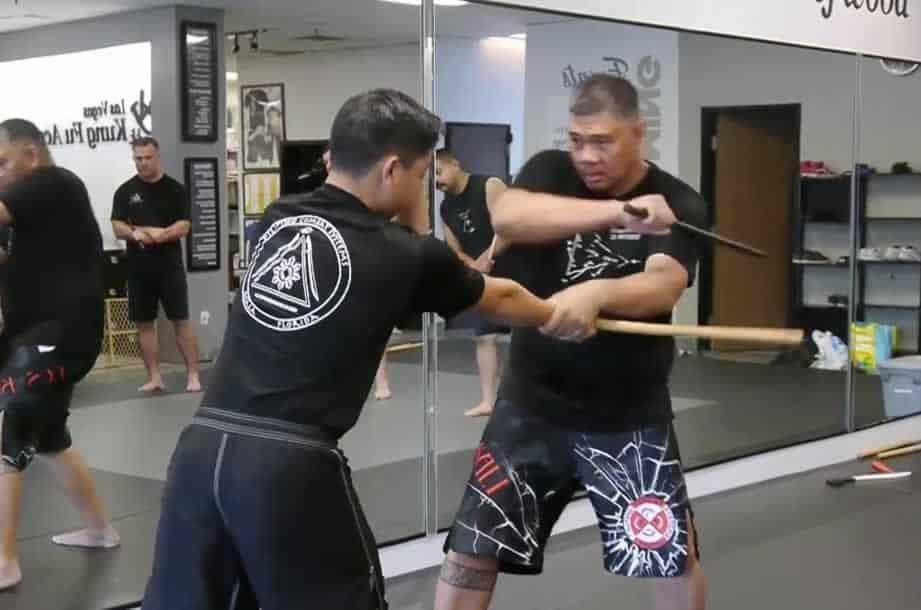 Sometimes, many people have the misconception that Kali, Escrima, And Arnis is just stick fighting. In the beginning, it is true that many of the techniques emphasized when first learning Escrima revolve around using the sticks.  However, sticks are just an extension of the hands.

In fact, Kali, Escrima, And Arnis are well rounded and complete martial arts systems that have grappling, throws, take-downs, kicks and joint-locks.  To sum up, all techniques that you learn in our class has two versions. The first version, is where you use just your empty hands. The second version, is where the same technique is used with a weapon in your hand.

As a result, once you have mastery of the Filipino arts you should be able to use anything as a weapon.

The way of dealing with attacks in FMA is  simple but effective. It's important to realize, all attacks are categorized in angles. Also, it does not matter what the attacking weapon is. Sometimes, it could be a baseball bat, a punch, a crowbar, or a knife. However, if it travels along the path of angle 1 then it is dealt with in the same manner.

As a result, this method of training speeds up the time that it takes to learn to defend yourself.

Sometimes, systematizing the curriculum for the fastest learning possible was very important to the Filipino people.

What our students are saying

This is a rare gem of martial art school! If you are looking for a place to become a well rounded and proficient martial artist, look no further. The owner, Kevin, is not only a great instructor, but even better, he’s a wonderful person and you can tell he is always looking out for the best interest of his students. There are no egos here, just learning and growing. Not many schools cover all the ranges of combat (kicking, punching, trapping, and grappling) and even fewer incorporate weapons training. You can find it all here!

I did a little bit of martial arts growing up, I've been to a few different schools. The thing is, when you see the instructor move and demonstrate techniques, you instantly know if he has any skill. As soon as I saw Instructor Isaac demonstrate some techniques, I instantly knew that I had to join.
I think it's cool to learn the trapping techniques of Wing Chun and Kali and I find that they are very practical and useful.
I would highly recommend this school to anyone looking for real self-defense techniques.

The Las Vegas Kung Fu Academy is a great place to learn Filipino martial arts, Jeet Kune Do, and Kickboxing.

The kickboxing style is a unique blend of all of the styles and is very effective and practical.

The instructors are very welcoming to everyone. They are very patient and more than happy to help you out. Highly recommend the Kung Fu Academy.

The best method for increasing your reaction time

The Filipino fighting arts of Kali, Escrima, And Arnis have a unique system of empty hand self defense techniques.

Generally speaking, most people associate the Filipino martial arts styles with being only useful when using weapons.

Actually, training with weapons give you the qualities and attributes necessary to for defending yourself with just your empty hands. In other words, the empty hand techniques are an extension of the weapons training found within these styles.

To clarify, many of the self defense techniques, blocks, attacks, entries, takedowns, and strikes are similar regardless of whether you are holding a weapon or not.

Kali, Escrima, And Arnis is also unique in that it uses a method of training called hubud-lubud to ingrain fighting skills automatically and unconsciously into the martial arts student.

When you become proficient at this drill it will give you extraordinary timing and sensitivity for swift and deceptive trapping. Eventually, your hands will just know what to do and how to strike. Clearly, this kind of automatic reaction is the direct result of drilling these very simple patterns into your muscle memory.

Some of the things you will learn in Kali, Escrima, and Arnis class are:

These are some of the concepts and drill we teach in FMA class.

One of the main styles that we practice here is known as  Cabales Serrada Escrima. This style of escrima is a close range fighting system that contains stick fighting, knife fighting, and empty hand techniques.

The Serrada system was founded by a man named Angel Cabales. In the past, Angel Cabales taught many famous martial arts masters in the U.S.A. Some of his students include Dan Inosanto, Richard Bustillo and Graciella Casillas.

The second system here at the Kung Fu Academy is known as FCS Kali. This systems founder is Tuhon Ray Dionaldo. Among the styles, FCS Kali itself is comprised of Sayoc Kali, Modern Arnis and Pikiti Tersia Kali.

This style is part of the curriculum taught at the world famous Inosanto Academy in California. For this style, it is a blend of styles raging from Lacosta, Balintiwak, and Lameco

We've tried to answer any questions you might have but if we've missed something you can always call us at 702-336-1095.

Question: Am I really ever going to get into a fight with sticks?

Answer: It is true that you are not going to carry your sticks around with you everywhere you go. However, Filipino martial arts have a huge curriculum of empty hands work that are useful for high level self defense.

Question: Do I need a martial arts background to learn FMA?

Answer: No. It's probably better that we start from scratch. Sometimes, people with a martial arts background have to unlearn what they previously learned to perform techniques correctly.

Question: Do I need my own sticks when I come to your school?

Answer: Not right away, you can borrow some. Eventually, you should get your own pair of sticks. How else are you going to practice at home?

Question: Is there a belt ranking system for Filipino martial arts?

Question: What exactly is Kali, Escrima, And Arnis?

Answer: Generally speaking, Kali, Escrima, And Arnis are terms for a system of stylized stick and knife fighting techniques that come from the Philippines.

Most people who just want to learn one style don't mesh well with the culture here. We always emphasize that all styles have limitations. Keep an open mind.

Jeet Kune Do Classes In Las Vegas And Henderson, NV

Martial arts have become very important in my life and I can't see myself as not doing now.

I have been taking Escrima classes at the Kung Fu Academy for four years now. During this time, I have grown a great amount. Slowly, I gained confidence in myself although, at times, I would almost quit. Instructor Kevin would assure me that I could do it, and he would actually take time to work with me. My self-value has risen and it's expressed in my work and in dealing with my clientele. My own mother doesn't even recognize me anymore. Allowing myself to push myself with no fear of how you or any of my peers view it.

In fact, Martial arts have become very important in my life and I can't see myself as not doing now.

Thank you, Instructor Kevin, for all of your support through the years

I don't think the overall changes my life has encountered since meeting you can truly be expressed in words...

Upon joining your school in May, my life has undergone many and refreshing changes. I have always looked into studying kung fu, but fear and schedule difficulties make it a challenge.

Since taking the class I have learned a lot about my physical self as well as a refreshing look in to how I look at things around me in the world. I have improved concentration, reflexes, stamina and endurance.

I think everyone should try this class, the level of enhancement between the mind body relationship is improved after the first week. Things just start to move a lot better in the way you think and the way tasks are accomplished.

Kevin and Renee are always ready for the information to be taken from them, and I for one am so respectful and happy that they have taken the time to instruct others in the way that have enriched theirs and many other lives. With the utmost respect."

Back To The Top